Plenty to catch up on today.  First, did everyone hear Version 2 of “Witness 4 the Prosecution” that dropped Wednesday night?  I freaked out when I heard it.  I was certain that it was superior to Version 1, which dropped about three weeks ago.  Then I listened to Version 1 again.  Damn, that’s funky.  Such a cool song.  Maybe Version 1 is better.  I can’t choose.  Check them both out and then pinch yourself because we’re about to get the motherlode of peak-era Prince music dropped on us in a month.  I’ll never get over the fact that the stuff Prince didn’t even find worthy of release is still better than most music 30+ years later.

So, last night I was looking at my Prince records and decided to rearrange them because that’s what I do.  I came to the conclusion that I’d rather sort my Prince collection chronologically.  That just made more sense to me.  I don’t organize any other artists like that, but there’s something I enjoy about seeing my Prince collection organized from oldest to newest now.  I just needed a change of scenery on my Prince shelf.  While I had them all out I decided to take some pictures.  If nothing else it makes for a cool IG post?  I don’t know.  Just let me amuse myself over here.  Here’s a look:

They look so small for some reason.  I swear these are full sized 12″ records that took up most of my living room floor. These are the LPs.  Yes, I’m adding his posthumous stuff like 4Ever, Piano & a Microphone 1983, and Originals to that list.  Also, in case you’re wondering, The Black Album and HitnRun Phases 1 and 2 are bootlegs.  The Black Album only has a few original copies and they cost thousands of dollars.  The HitnRun records were never released on vinyl, but Strictly Discs had come copies that were pressed in Australia.  When/if they’re ever officially released I will purchase the legitimate copies.  Don’t hate me for owning fakes as placeholders for the time being.  Also, if you have a decent copy of The Gold Experience or Come for sale for a reasonable price I’m interested. 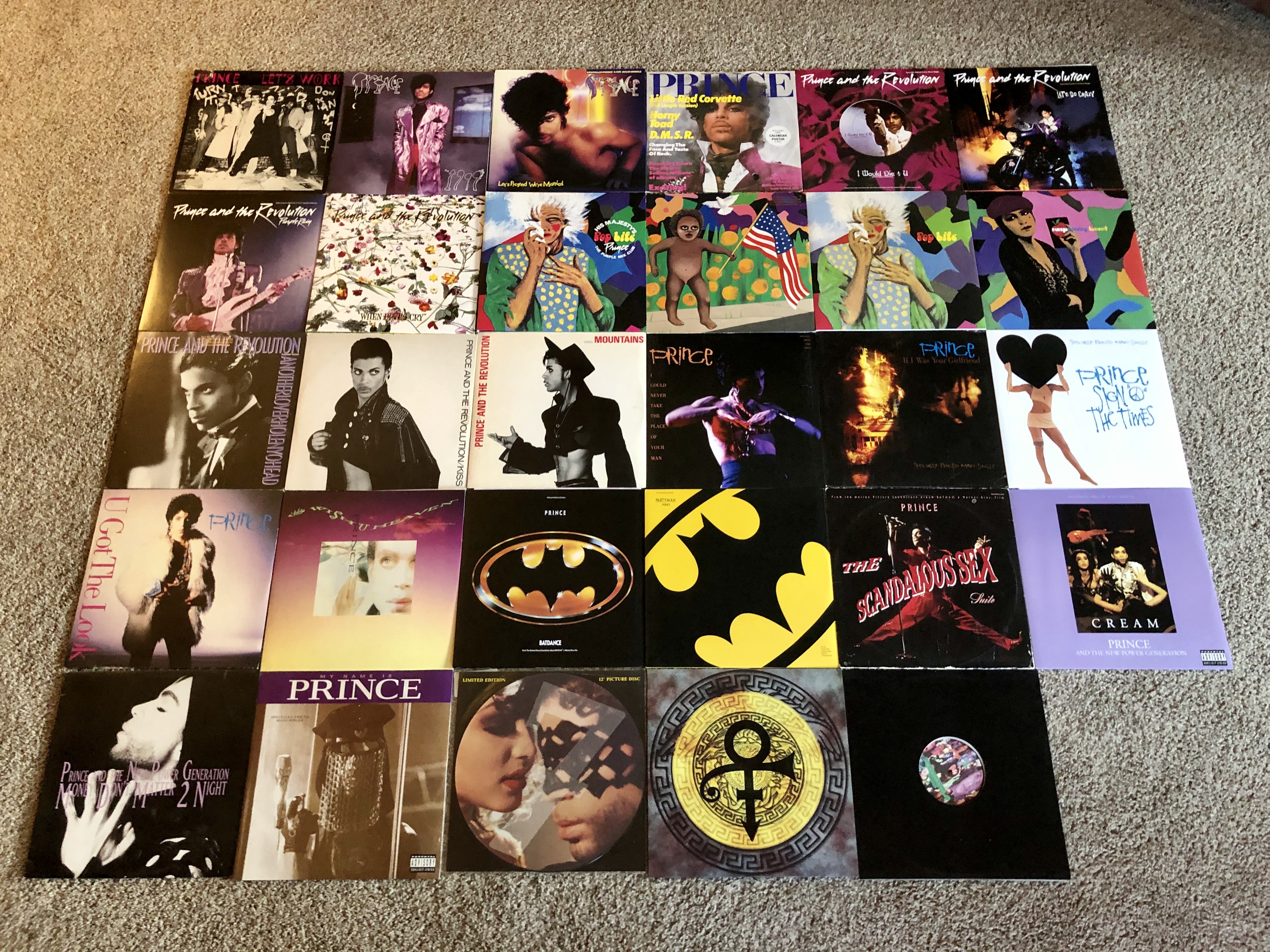 I’m impressed that I managed to take these pictures without getting my feet in them.  I’m not much of a photographer.  Here are my singles/special releases.  Most of these are 12″ singles, but I do have a few of the recent Record Store Day oddballs in there like the 1999 promo version, His Majesty’s Pop Life, and The Versace Experience.  Prince 12″ singles are special because you typically get an extended version of a classic on the A-side that you can’t find anywhere else.  I’ve tried to find the extended versions of “Mountains,” “Anotherloverholenyohead,” and “America” (among others) online, but the best place to get them is the 12″ singles.  Even better, so many of his singles have killer B-sides.  “Erotic City.”  “17 Days.”  “She’s Always in My Hair.”  The only way you can get those classics on vinyl is to own the singles.

These are some random bootlegs I’ve seen in stores over the years.  I can’t say I listen to these a lot, but there is some cool stuff in here.  I basically bought them because they’re vinyl and they’re Prince.

Here are my 7″/45’s.  There aren’t many, I know.  I like these, though.  The “Little Red Corvette/1999” picture disc was a hard-to-find Record Store Day release.  “Rock ‘N’ Roll Is Alive (And It Lives In Minneapolis)” was a Timberwolves game exclusive.  I bought the “Nothing Compares 2 U” picture disc off of the Prince.com shop along with a t-shirt for $40 and had to wait a long time for it.  Then I saw the single at The Exclusive Company for $9 and was pissed.  I bought it, then I went home to cancel my order from Prince.com, but it was too late.  When I finally received it I noticed that it was different than the other one I bought, so I kept it.  Now the one from Prince.com is going for $67 on average on discogs.com.  I’m not gonna sell it, but I guess I’m glad I didn’t cancel that order after all. 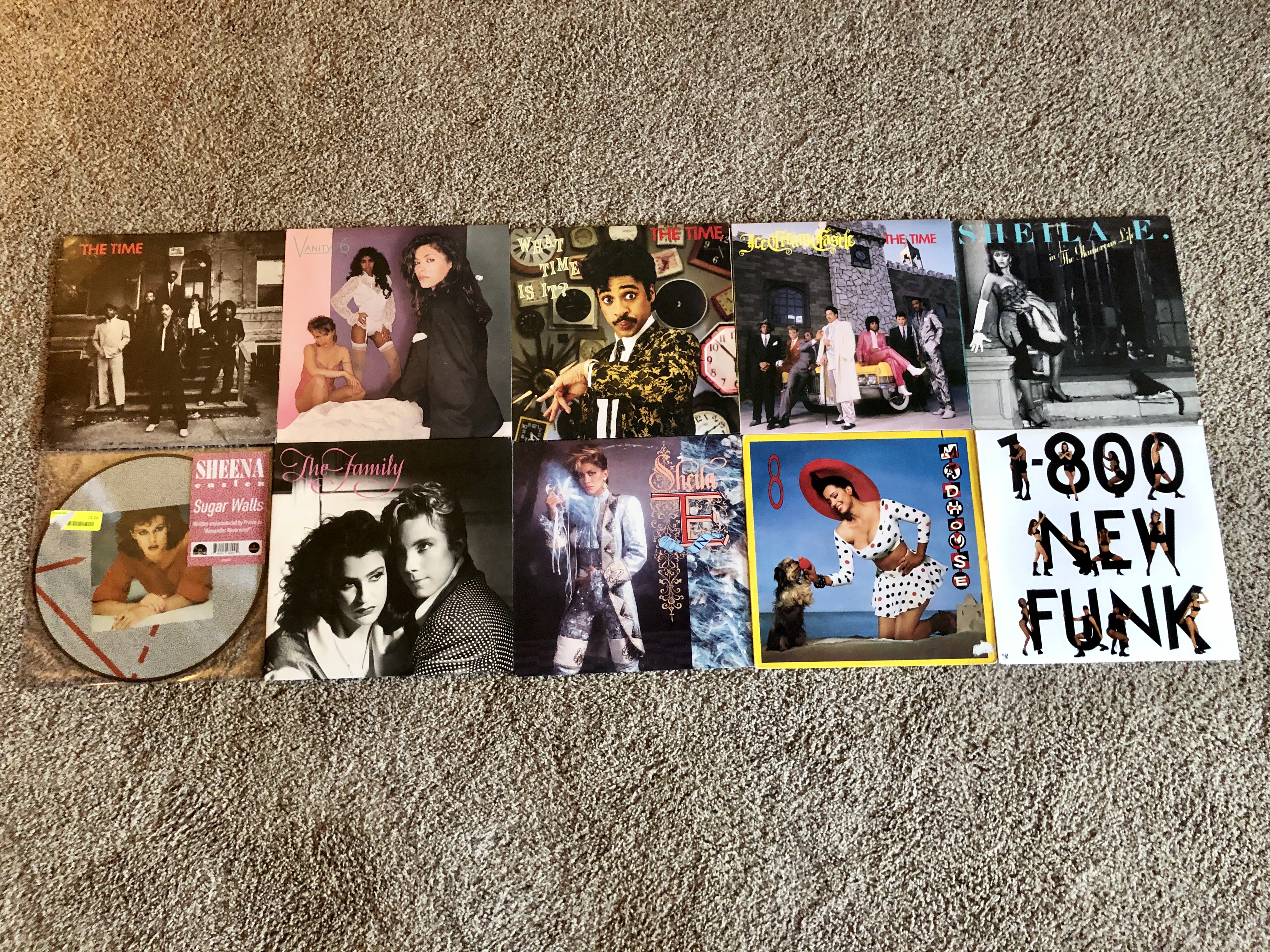 Here are my Prince records that aren’t officially Prince records.  I love those records by The Time, but the best kept secret in that bunch is The Family.  Good album top to bottom, and contains the first released version of “Nothing Compares 2 U.”  Still waiting on that Apollonia 6 record, Andy…

Lastly, the cassette collection.  I’ve never listened to any of them and most of them are still in cellophane.  They just look cool on a shelf.  Plus, it kind of freaks me out to see and hold a cassette because it takes me back to the 80’s when I had a box full of these.

So, I go to all of this trouble to photograph my Prince collection and literally the next morning I get a wonderful e-mail from the Prince shop:

Oh shit!  The beautiful Sign ‘O’ the Times 7″ vinyl singles set is on the way!  It’ll be here next week.  I can’t wait to see it.  They only made 1,987 of them and I got one.  That will immediately be a favorite in my collection.

I realize none of this has anything to do with today’s song, but I thought fellow Prince fans might dig it anyway.  The never ending search for more Prince vinyl continues…

As for today’s song, I’ve spent 900 words distracting you because I don’t have a lot to say about it.  “It’s Gonna Be Lonely” is the final track on Prince’s self-titled 1979 album.  At the end of an album full of disco-fueled dance floor tracks and one guitar God classic (“Bambi”), you know Prince had to slow it down to end the album.  “It’s Gonna Be Lonely” showcases Prince’s falsetto in vintage form.  I dig this song because it has just the right amount of 1970’s yacht rock vibe without being too over the top.  It’s got a laid back Hall & Oates “She’s Gone” feel to it.  Just a good song to chill to.  I’m not gonna lie and say it’s a standout in Prince’s catalog, but it’s an easy song to like.  As strange as this sounds, I’m typing this while staring at the Prince album cover and the melancholy vibe of “It’s Gonna Be Lonely” is written all over his face.  It’s the perfect picture to go along with this song.