He’s the DJ, I’m the Rapper

A Night at Birdland

Reachin’ (A New Refutation of Time and Space)

Black on Both Sides

If you’re tired of my posts filling your Facebook feed, I’m almost done!

We’re back to D’Angelo.  The only artist to appear twice on this list.  How can a single artist create two pieces of work that I consider to be included in my ten most influential albums?  Let’s see…

D’Angelo released his debut album, Brown Sugar, on July 3, 1995.  It altered the landscape of popular music at the time.  Not as obviously as Nirvana’s Nevermind or Dr. Dre’s The Chronic did a few years earlier, but if you listened to R&B music you witnessed the shift.  The neo-soul movement of the mid-90’s made soul music a thing again and created a split in what was considered R&B.  You could still lazily call all of it R&B.  Most people unfamiliar anything by a black artist consider it all hip hop/R&B, right?  I’ve seen Lenny Kravitz in the R&B section of some record stores.  I’ve seen Erykah Badu in the rap section.  Just wrong.  Anyway, R. Kelly and Ginuwine were not making the same music D’Angelo and Maxwell were.  Not that I didn’t dig “You Remind Me of My Jeep” and “Pony” but they’re dissimilar to what D was doing.  The influence of classic soul music is more prevalent in D’Angelo’s music.  R. Kelly lived in the club and the bedroom (or freaky sex dungeon?) while D’Angelo lived in the soul.

I’m speculating here with no statistical evidence to back it up, but at the time I’d say popular artists were releasing new albums every 1-2 years.  By the time 1997 rolled around my anticipation was already building for a new D’Angelo album.  He teased with a few soundtrack appearances, including an amazing cover of Prince’s legendary B-side “She’s Always In My Hair” on the Scream 2 Soundtrack.  Erykah Badu grabbed the neo-soul baton from D and ran with it in ‘97.  Baduizm was fantastic and took the music world by storm.  Erykah lost Best New Artist at the 1998 Grammys to Paula Cole (?!?).  1998 rolled around and I started growing impatient.  D released the Live at the Jazz Café album which was a nice treat, but that did nothing to sate the hunger.  He must have been cooking up something good because it had been three years.  I was getting restless.  How could this guy just show up and drop a classic, then vanish like this?  Turns out he was just getting started.

D was spending that time schooling himself in the history of soul and funk.  He made himself at home at Electric Lady Studios in Greenwich Village, New York City.  Electric Lady was made famous by Jimi Hendrix, then used by other legends like Stevie Wonder and David Bowie.  By the late-90’s it had sat dormant for an extended period of time.  Much of the original recording equipment and instruments used in the studio were still there collecting dust.  If there was a criticism of D after Brown Sugar it was that his live shows were lacking.  Just a dude sitting in a trench coat behind a piano.  D spent his extended time between albums assembling a crew of like minded collaborators and a killer band.  Questlove.  Pino Palladino.  James Poyser. They would spend hours watching tapes of live performance by legendary artists like James Brown and Prince.  They’d comb through classic Soul Train Episodes.  After they absorbed a few hours of funk and soul history each night they’d jam for hours inspired by the masters.  They did this for years.  Once they acquired an encyclopedic knowledge of everything funk and soul, they put it all together and added their own flavor to it.  D employed sound engineer Russell Elevado to capture the sound on tape to keep that warm, old school sound.  Nothing digital.  While people like myself and countless others waited impatiently, D’Angelo was creating something legendary.  He wouldn’t be satisfied with another popular soul album.  He’d already done that.  He was creating art that would be remembered for generations.  He filled Electric Lady with other collaborators who came to be known as the Soulquarians.  Erykah Badu, Q-Tip, J. Dilla, Mos Def, Talib Kweli, Bilal, Common, and of course, Questlove.  The Roots, Common and Badu all recorded albums there at the time D’Angelo was recording.  This incubator brought out the best in everyone there, especially D.

Fall of 1999.  It was finally time.  An epic performance on “The Chris Rock Show” demonstrated that he had become a master of funk and soul the likes of which the world hadn’t seen since peak Prince.  The “Left & Right” single was released and the B-Side “Untitled” and its video stole the show.  On January 25, 2000, the 4.5 year wait was over.  Voodoo finally arrived and it was so much better than the hype.  It was, and still is, the greatest album I’ve ever heard.  Nothing I’ve ever heard sounds like it.  D’Angelo and the Soulquarians created a sound that was both timeless and completely brand new.  The effortless cool of the opening track, “Playa, Playa.”  The smoldering funk of “Chicken Grease.”  The raw heartbreak of “One Mo‘Gin.”  Every track is unique and something new is revealed with every listen, even 20 years later.

Part of what makes Voodoo perfect is the imperfection.  With a major assist from superproducer J. Dilla (rest in peace, Dilla) the band learned the subtle technique of playing offbeat, but somehow staying in the groove. D’Angelo’s layered vocals aren’t always timed perfectly on top of each other.  On some tracks – specifically “The Root” – you can hear D mumbling in the background.  These imperfections give the album a uniqueness you don’t get when there’s a drum machine and auto tune.  You feel the band playing together in the studio.

I believe I could write a post for every individual track on this album.  At some point over the course of 20 years I think every one of them has been my favorite.  When the album was released I couldn’t stop playing “Spanish Joint.”  “One Mo’Gin” is such an amazing slow burn and the ultimate track to play alone in the dark with a drink.  In fact, it’s Friday night and I’ll be heading to the turntable with a whisky to listen as soon as I post this.  “Chicken Grease” is so funky.  In recent years “The Root” has become my go-to track.  I can’t get over the offbeat drumming, guitar, and gorgeous vocals.  Today I was listening and I couldn’t stop playing “Send it On” on repeat.  Something about the the interplay with the drums and horns on that track caught me by surprise today even though I’ve heard it hundreds of times.  The track I always come back to is “Untitled.”  I’ll never understand how Questlove was able to drum that song.  The drums drag so hard on that song it’s almost disorienting.  D’Angelo serves up a vocal performance for the ages.  It’s criminal that “Untitled” is remembered by many for that video and not for the what a mind-blowing song it is.

I listened to a podcast recently that Questlove did with legendary tour manager Alan Leeds.  Leeds has had one of the most amazing lives you’ve never heard of.  I related to what Leeds was talking about so much I wondered if he was my biological father.  He has managed tours for James Brown, Prince, and D’Angelo (among others).  We’re talking about “Sex Machine” era James Brown.  He started with Prince during the 1999tour and stayed on through the Diamonds and Pearls album.  During the interview he told Questlove without hesitation that the best tour he had ever been a part of was D’Angelo’s Voodoo tour.  That’s high praise.  I missed that tour when it came to Milwaukee on July 4, 2000.  Still one of my biggest regrets.  I have yet to see D’Angelo in concert with one of his bands.  I did see D with Questlove at First Avenue in Minneapolis (made famous by Prince & The Revolution in Purple Rain) on June 23, 2013 and they jammed for two hours.  We got there early, too, so we were right in front, but it wasn’t quite the same as seeing D with one of his bands playing his songs. 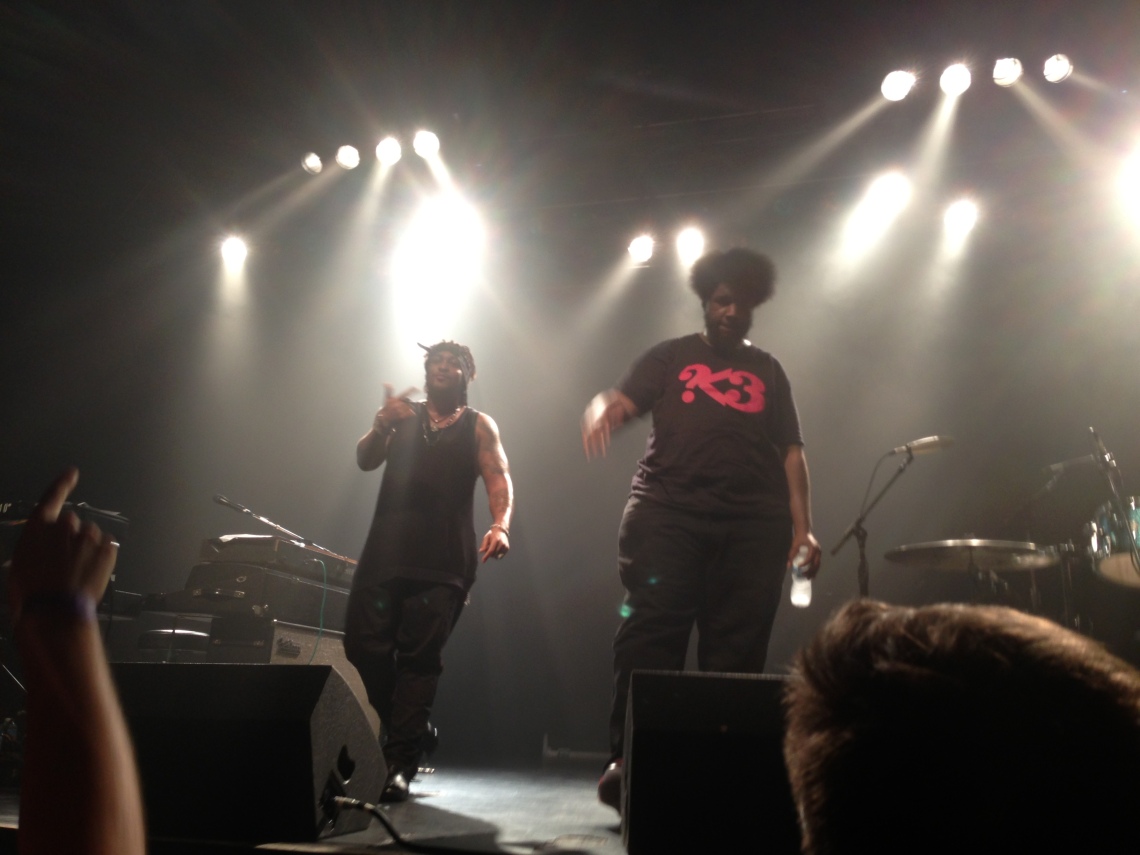 If you follow D, you know what happened next.  Countless awards for Voodoo, including a few Grammys.  A life-altering performance at the MTV Movie Awards.  Then he really vanished.  The 4.5 year gap between his first two albums was nothing.  His third album, Black Messiah, dropped in December 2014.  Nearly 15 years after Voodoo.  It was as if he never left.  Another masterpiece.  D certainly believes in quality over quantity.  In a theringer.com article recently about the 20-year anniversary of Voodoo, music journalist Jeff Weiss said: “You could credibly make the arguments that D’Angelo has the best—whether you want to call it R&B or soul or even funk—album of the last three decades.”  Couldn’t agree more, Mr. Weiss.

It has somehow now been longer since D’Angelo released Black Messiah than it was between Brown Sugarand Voodoo.  That doesn’t seem possible.  I still play all three albums along with his Live at the Jazz Caféalbum and a bunch of live bootlegs on an almost daily basis.  I have a Google search alert on D’Angelo, which gets frustrating because Minnesota Timberwolves point guard D’Angelo Russell fills my inbox every day.  I frequently scour the internet for any hint of more D’Angelo music and in doing so see fans demanding more music.  Begging for D to come back.  Here’s my response to that: Do whatever the fuck you want, D.  it’s working.  You owe us nothing.  Would I love to hear more?  Of course.  In three albums D’Angelo has given us enough brilliance to last more than a lifetime.  I hope every day for another surprise release like we got with Black Messiah in December of 2014, but you can’t rush greatness.  Let the man work…or not if he’s not feeling it.

So, how did Voodoo influence my taste in music?  In a lot of ways he ruined music for me.  Of course I love a lot of artists, but none of them compare to D’Angelo.  After a couple years of Voodoo and realizing we were in for another long wait for more of his music, I started looking in to D’Angelo’s influences.  If I’m not going to get more D’Angelo, I might as well start checking out the people who inspired him to become the artist he is.  That led me to deep dives in to legends like James Brown, Jimi Hendrix, Sly and the Family Stone, and Stevie Wonder.  It also led me back to someone who I had admired and listened to for 20 years, but had never taken the full leap.  For my tenth and final post on this list we’ll go to a lonely hotel room in Rhinelander, Wisconsin, and an album from 1982.