Friends, I’ve been laid up. Them doctors, they just plum ripped out part of my spine. They done messed me up real good.

Uhhh, anyway. I’ve been laid up. Laid up in Seattle, in the months of January and February and now March. There is not a worse time in a worse place to be laid up than winter in Seattle. Although, in fairness, this winter has been unusual, as you may have seen on the national news with Dan Rather or Charles Kurault or Ron Burgundy or…who was that guy who cried when JFK got shot? That guy was cool. That guy had integrity. That guy was from a better America. Nobody got their spine ripped out in those days. Presidents got shot in the face, but, hey, you take the good with the bad.

Was that Katie Couric? Tom Zalaski? What was that guy’s name? Frank something? I’m not looking it up.

Anyway, there was snow in Seattle, so that gave me something to look at other than this bloodless white-grey sky that otherwise hangs over the Puget Sound region like a mildewy gym towel.

So I’ve been working on staying sane while this here spine turns back into a spine. They sliced me up something awful. At first, I couldn’t get up and walk none too good. Could barely get to the shitter, you know? Now I’m like a will-o-the-wisp though. Or one of those stark raving mad vibrating dancers from…what culture is that? Are they banshees? I don’t know. It doesn’t matter.

What I wanted to write about was Steve Gunn. His music — along with a few other musics (so much Coltrane) and a few visitors (the keeper of this here blog chief among them) and my girlfriend, who is some kind of saint — has been keeping me sane. Actually, not keeping me sane. Clearly that’s not the right phrase. It’s been allowing me to punch through the aforementioned mildewy gym towel and return to the place I first discovered the music of Steve Gunn: Joshua Tree, California. It was one year ago this very week. Elisabeth (aforementioned saintly girlfriend) took us down there last year on my birthday. (My birthday is MARCH 11 and it’s coming up and send me extravagant gifts because it’s a miracle I’m alive.) I want to write another post about how large and perfect is the heart of the woman named Elisabeth. But let’s save that for a time when I don’t say “shitter.”

Anyway. She surprised me last year on my birthday with a trip to an AirBnB over which I had been Insta-lusting: The Joshua Tree House. You fly into Palm Springs and you get in your rented car and you drive out of that town and up through some canyons and onto the floor of the moon. You keep driving and you haven’t seen any people (at least not any people who don’t want to murder you) for a long time and then you have to open up some locked chain fences and then you are driving across the desert for a while and then somehow you’re at a stylishly appointed house with lizards skittering around outside.

In that house was a small magazine-pamphlet thing entitled DESERT ORACLE. On its cover was a crude image of a flying saucer. You don’t have to know me too well to know that this was the greatest thing I’d ever laid eyes on. 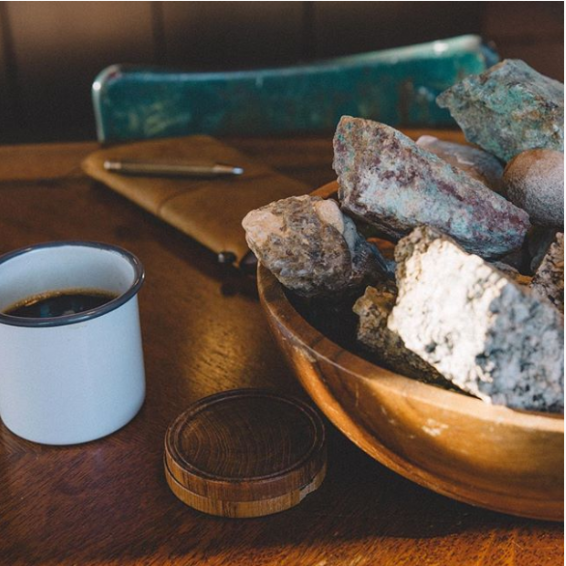 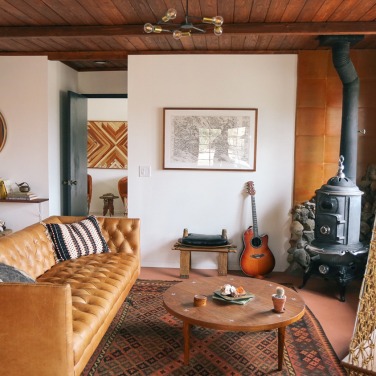 To some extent, the rest of the birthday vacation was a mission for me to find out all I could about this DESERT ORACLE, and literally to find all existing copies of the publication (if there were even copies and if it was even a publication rather than an alien communique meant for my eyes only). I hit the jackpot at a bar in the middle of a haunted black hole desert sand wash where we witnessed some of the greatest live music I’ll ever see. I’m not giving away the name of the bar (hell no it was not Pappy’s; this place was the polar opposite of that), but I’ll tell you that A) The singer wore an inexplicable giant panda head and B) When I asked the bartender if they carried DESERT ORACLE, she not only brought me a small stack of them but looked at me favorably, as in, maybe they wouldn’t have to kill me on the spot.

I read all the issues. One of them mentioned the music of a certain Steve Gunn, and I thought, if these people like Steve Gunn, surely I will too.

From that point forward, desert driving was accompanied by either the DESERT ORACLE podcast (if you haven’t yet heard it, I just told you about your new favorite podcast) or Steve Gunn’s “Eyes on the Lines.” The former is…a thing you just need to experience. The latter is one of the best driving albums ever recorded, particularly if those drives involve coffee and nearly infinite desert vistas that finally terminate in hot waves of ghost desert haze that mark the end of civilization, the end of time, the end of the world.¹

Like the Seattle sky I’m looking at right now, those vistas are nearly colorless. But it’s a different lack of color, a kind born of heat and mystery and the residue of the souls and the stories of the ghosts. The pale green of the Joshua Trees and sagauros is the same color as the tawny sand and the concrete of the intermittent roads that you can trace for 100 miles from the top of a rock pile. Oh how I love this land.

Steve Gunn’s music on “Eyes on the Lines” is that same color. It’s sun baked and scorched. He is the Marlboro Man, alone in the desert, singing about the mysteries and vagaries of the universe.

Or maybe I am the Marlboro Man and he is my soundtrack as I ride into the desert sunset. I guess my horse is a Jeep and I don’t smoke, so that metaphor is dead now. But I know this much: when I burn some sage and hear “Ancient Jules,” I am anywhere but here. Which, these days, is exactly where I want to be.

¹All of Steve Gunn’s music is great.  I’m focusing on “Eyes on the Lines” because it was the record that got me into his world. But don’t get the idea that that’s the only one from this guy’s extensive catalog. All of his stuff — from his early experimental instrumental guitar work to his brand new one, “The Unseen In Between” — is highly recommended. If I’m lucky, this guy will keep evolving and keep making records for his whole life. Cuz where are the Bob Dylans and the Bruce Springsteens of this era? People who make records that mark moments and then move on and do something different?

Published by A. James Brawner

Sportsman, aficionado. View all posts by A. James Brawner