I was trying, but I wasn’t really feeling fall this year.  Life keeps getting in the way of outdoor fun.  It’d be easy to say, “You’re 40 now, Charlie, time to grow up.”  I have two responses to that.

Second: I’ve been grown up.  I’ve had a job and a family for years, I work hard at both of them, and I’ve always put them ahead of my outdoor pursuits.

Something has been different this year.  I’ve been to the deer hunting land twice already.  We had a blast with Ron & Jo a few weekends ago.  Tyson and I went to the land in September as well.  I have a nice buck on the trail cam.  I’ve named him Taylor Swift.  I’m not going to explain why.  I have my reasons.  I enjoyed one of the best goose hunts I’ve ever had on an amazing opening day with Hoot on October 1.  I have no complaints.  Something still hasn’t felt right.  I can’t explain it.

Usually by September 1 I’m already overflowing with enthusiasm for a deer hunting season that doesn’t start until five days before Thanksgiving.  I wander Cabela’s aimlessly.  I don’t need any new gear, but I want all of it.  I literally dream about what might walk under my stand on that November Saturday.  But this year…nothing.  Midwest Whitetail, Ron Spomer, Wired to Hunt, Field & Stream, Outdoor Life…I’m still consuming all of them, but I’m not feeling any of them.

My kids had the day off of school yesterday and Chels didn’t work, but I did, so they went to Madison for the weekend without me.  A little bit of time alone is nice, but I’m really not a fan.  I’m mostly just bored and lonely without them.  On the bright side, this meant I had an entire Saturday to go hunting.

My guy Werz was going to take me bow hunting this morning, but I never heard from him.  WTF, Werz?  I was ready to be the videographer and learn from the master.  Not to be this weekend.

So, I thought I’d get Hoot and head back to the Ahnapee instead.  There was a problem…Hoot couldn’t make it.  I decided I’d grab Belle and head there myself.  So, mid-morning today I packed up Nicki Minaj (I named my truck Nicki Minaj.  I’m not going to explain why.  I have my reasons.) and headed northeast.

I got to Hoot’s land shortly after 11:00 and dragged my gear down to the river.  You always have to listen first to make sure there aren’t geese on the river.  I didn’t see or hear a thing.  No chance of scaring up geese…or so I thought.

I got the boat loaded up and headed toward the spot.  I came around the small island and immediately saw geese.  A lot of geese.  A gaggle.  Is that a thing?  A gaggle?  Dictionary.com says my instinct is correct.  “A flock of geese when not flying.”  I was exactly right.  Score one for my expansive vocabulary.  There must have been 50 Canadians, and they weren’t pleased about Belle and me just casually cruising around the corner with two horses of Minn-Kota power right at them.  They ungaggled and became whatever you call 50 geese that just went from not flying to flying.  I’m gonna say a flock, or a flying gaggle, if you will.  I had no idea they were there.  Easily the quietest gaggle I’ve ever seen.  Belle and I were off to a bad start.  I really didn’t care.  If there were that many geese just sitting there at 11:30 in the morning there were bound to be more. 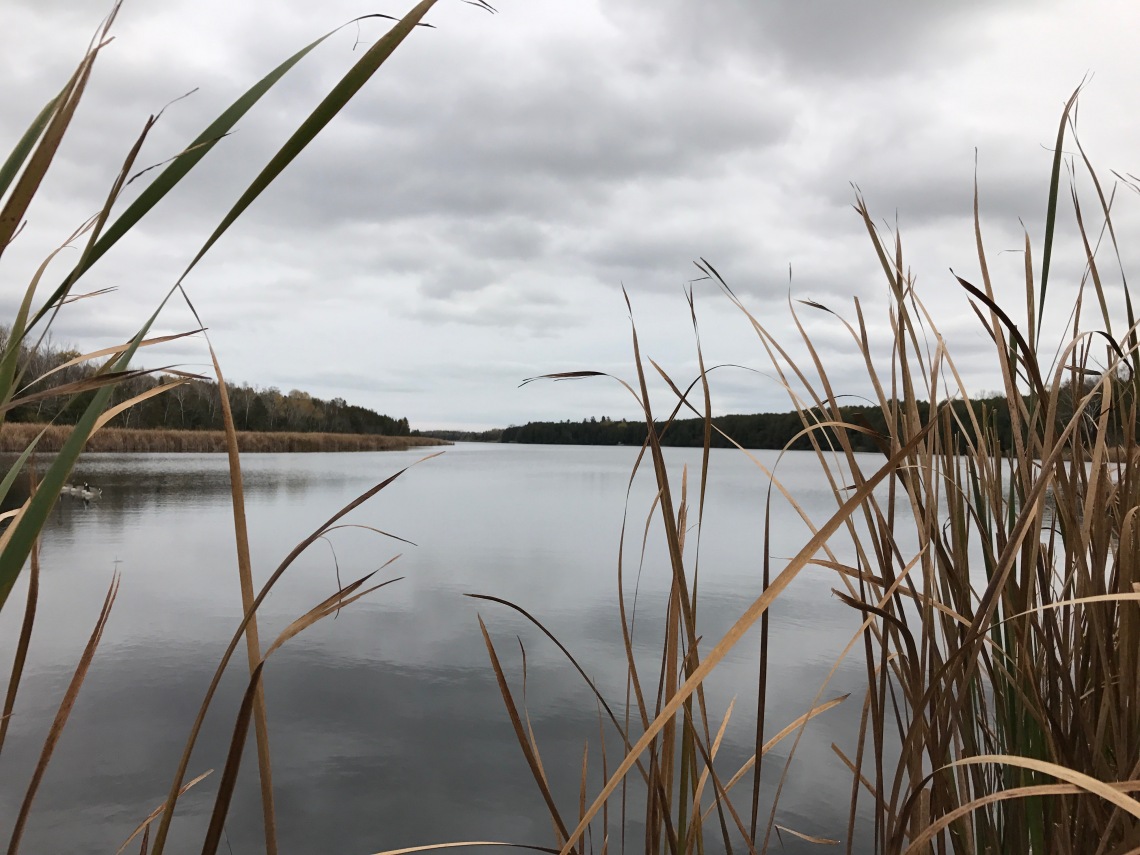 I expertly put the decoys in formation and tucked back in for what was about to be a successful day of hunting.  Then exactly nothing happened.  For a long time.  I talked to Hoot for a while.  When he wasn’t on the phone excoriating me for my lack of success, he was texting me encouragement like this:

Despite the typo, I got the message.  I really missed him today.  It was a beautiful day.  55 degrees, light wind, overcast.  Perfectly comfortable in a light jacket and light boots.  I got bored, though. 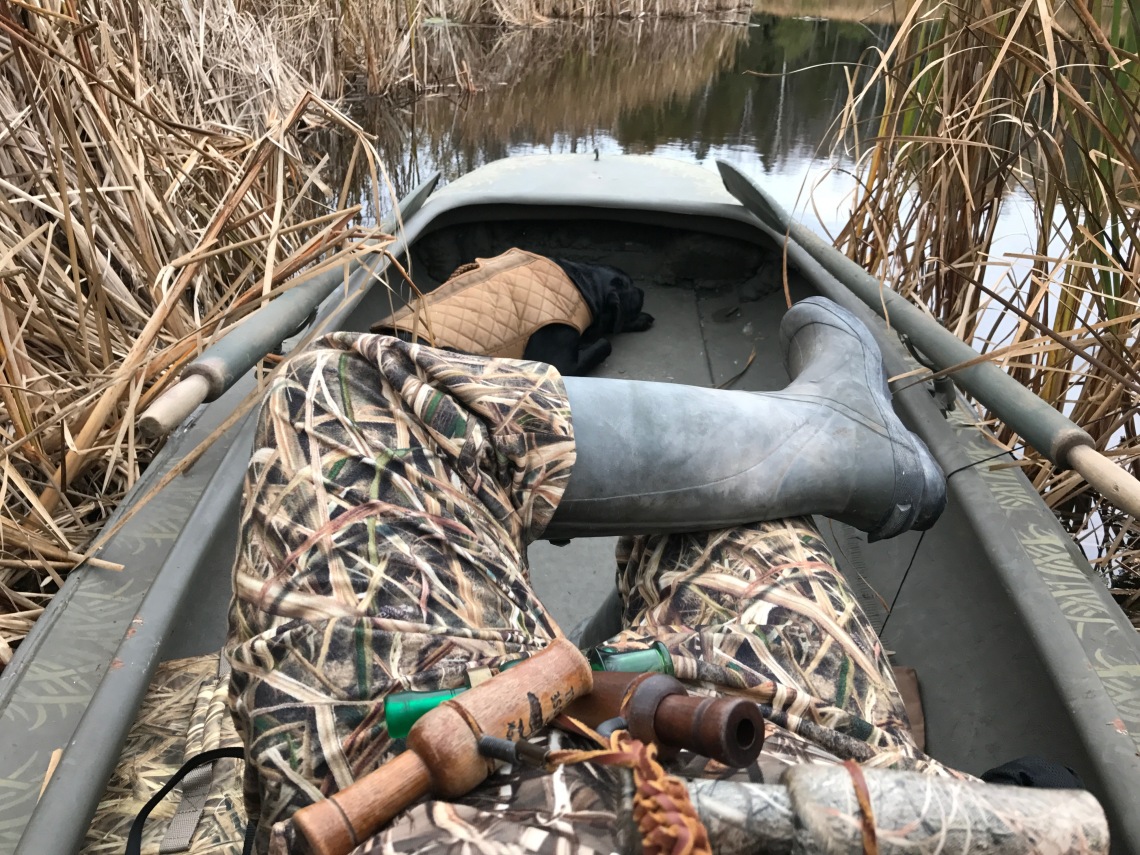 As I was contemplating packing up and leaving I thought to myself, “For what?  Nobody’s home.  It’s beautiful out.  You wait for this and talk about it all year.  Just enjoy the outdoors, idiot.”  I was right.  I am an idiot.  However, occasionally I can be wise.  I thought, “Treat it like deer hunting.  You sit all day in a deer stand and don’t get bored.”

Also…am I crazy or is deer hunting opening three weeks from today?  Wait, what?!?  We leave for deer hunting in 19 days.  Not possible.  Actually, Halloween is two days away.  It really is October 29.  Where did October go?  It’s not that I’ve spent the entire month completely unaware of the date, but somehow it didn’t hit me until 2:00 today that IT’S FREAKING OCTOBER 29TH???  Where have I been?

Then I had a mini-panic.  I hadn’t talked to anyone at the Blacksmith Shop in a long, long time.  I better call them to confirm our rooms.  Sure enough.  Three deluxe-luxury suites confirmed.  The finest accommodations in the greater Balsam Lake/Luck region.  I love that place.  “See you in three weeks,” the friendly lady said before hanging up.  Then I said, “Tell Taco Kid he better wear comfortable shoes and bring extra hot sauce in three weeks because my crew will be there for Taco Night and we’re eating every motherfucking taco in Polk County.”  OK, that last part definitely didn’t happen, but I thought about it.  And I definitely enjoyed typing it just now.

I texted Ron, Dave, Kneecap, Colin, Brett, and Tyson.  The BS Shop reservations are confirmed.  I had a warm feeling rush over me.  How did I get within three weeks of opening day without realizing it?  I felt like Ebenezer Scrooge when he yelled out the window to the boy who told him it was still Christmas morning.  He hadn’t missed it.  “I am as light as a feather.  I am as happy as an angel.  I am as merry as a schoolboy.  I am as giddy as a drunken man.”

I spent most of the rest of my time in the duck boat today merrily texting my brother and the deer hunting crew.  You’ve probably been asking yourself, “Weren’t you supposed to be hunting?  Why are you on the phone so much?”  Here’s the thing with goose hunting: I can count on two fingers the number of times I’ve had geese sneak up on me.  In case you hadn’t noticed, geese make a lot of noise, and they tend to fly slowly.  If I heard geese, I would barely have enough time to put my phone down, make a cup of coffee, read ‘War and Peace’, cook the Thanksgiving turkey, and get back just in time to drop two of them.  There might have been ducks zipping by me the entire time.  I doubt it, but I don’t care.  I would’ve missed them anyway.  Elusive little bastards.  Ducks are only there to taunt me. 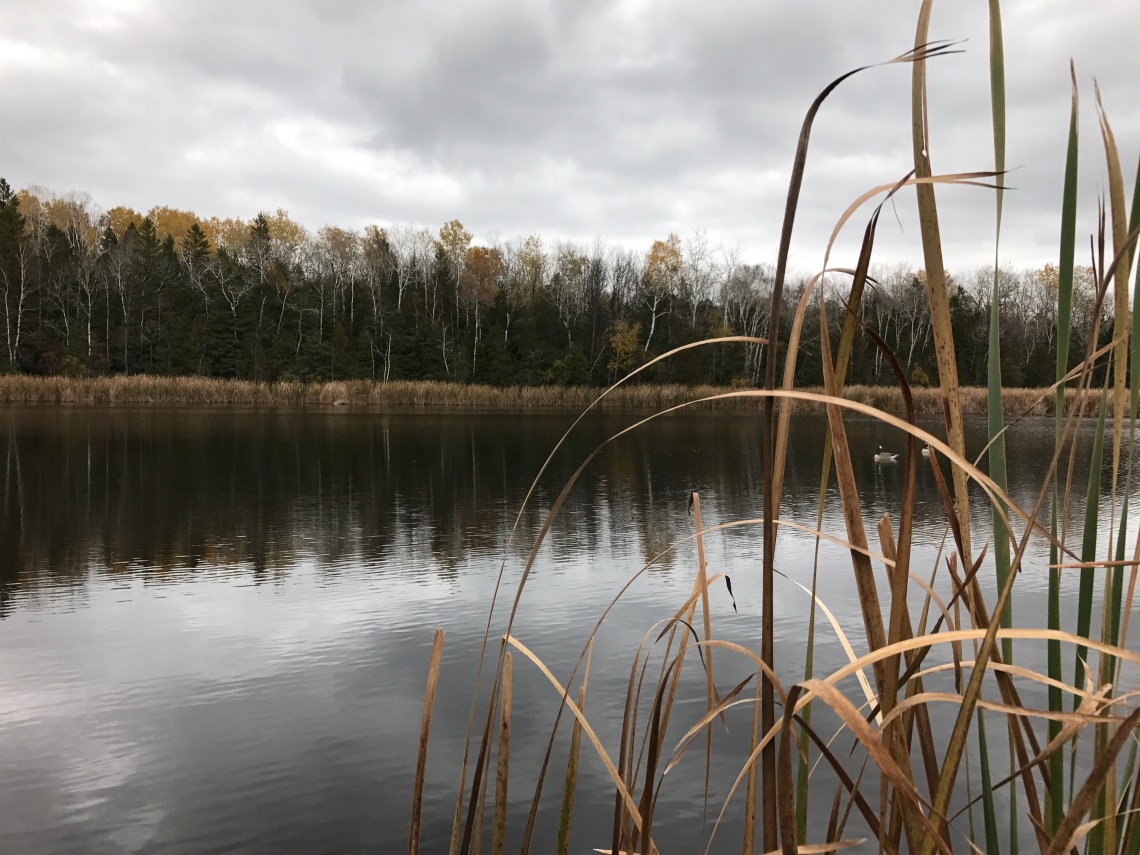 I finally threw in the towel at about 4:00.  The only geese I saw all day (gaggle notwithstanding) were at least 1/2 mile away and had no interest in landing in the river.  My hunt was over.  It was simultaneously unsuccessful and very successful.  I came home sans geese, but the autumn fire has been lit.  I spent the ride home listening to Mark Kenyon and Mark Drury talk about the rut and the 217″ whitetail Drury dropped a few days ago.  Seriously, go to druryoutdoors.com and check that thing out.  Amazing.

Time to get the blog going again.  Time to go to Cabela’s and spend money on something I don’t need.  A bottle of Tink’s #69 Doe in Estrous Scent?  You’re damned right.  I’ll take two of them, in fact!  It’s almost time to pack up and head west with enough gear to last us a month even though we’ll only be there for two days.  Did I mention I have a pickup truck now?  I’m gonna fill Nicki Minaj with venison.  It’s almost November!  YES, LAWD!

Now that I’m excited as hell, I must go to bed.  Hoot will be here in less than 7 hours and we’re going back to the Ahnapee.  I’m excited for deer hunting, but that doesn’t mean I don’t need redemption for today.  The Mighty Ahnapee Geese must pay.